Rev. Socratez S. Yoman – Blood Is Not Comparable to Spit 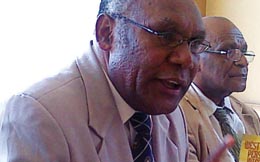 Jayapura, The development in Papua have not finished yet and there are lot of things to be done, which one of the most important factor is that we should not forget the development of the people in Papua, if we do not want to just being a bystander for the advancement of Papua. However, on the other side, because there are still a lot of homeworks to do to solve the problems in Papua, there are still lots of conflicts between some important people in Papua.

The existence of these people as the wise mediator, leader, and decision maker for its own people. Not only using their people to support them to take down other parties.

One of the example is Theys Eluai who is a respected figure even though once accused as the brain of the separatist movement, where his voice succeeded to unite all the elements of the people of Papua from the shore to the mountain for the prosperity of the people of papua without any special treatment to certain parties. Recently, some actions that Theys did in the past is one of the reason of the emergence of autonomy issued by the Indonesian Government for Papua.

Similarly some actions that have been done by Theys starts to show its good effect through the issuance of the special autonomy. Because of these improvements, a lot of Papuan people that have started opening their mind to start working independently to live a better life.

However, some odds are also noticed from the way how Papua growing better. Claimed himself as a “shepherd”, Socratez S. Yoman always bringing up all the problems from the past which disturb the progression of the Papuan people to be more rational. From his provocations, Socratez always bringing up the underdevelopment of the Papuan people. He stated that Papua is still oppressed and will not going to be better.

event the worse thing from someone who claims to be a priest is that it is not rare from him to disrupts the politics with the intention to direct his followers to go against every other group that does not share same vision with the one he has. Using ULMWP as a shield with thousands of followers also make it easier for Socratez to silence other fractions with actually have also done a good portions in fighting for Papua.

If Socratez is dare enough to look down at dignity of the Papuan people based on his own assumption, then it is not wrong if other groups think of him as an instigator and the person who tell lies.

The fight of Papua has become a complex thing and deeply rooted which is not true if there is only one main element that claims itself as the ‘Warrior of Papua”. An oppressed nation stands on the history and history is not a lie.

As a military fraction, the existence of TPNPB/OPM also has vital role. Taking a look at an effort. We value that your fight is not more important than the blood and sweat of the steep mountain that we have to pass. TPNPB/OPM even never tries to compare their efforts with ULMWP which has been promoted by Socratez. However, if the way Socratez delivering his message hurting the history, please know “Blood is not comparable to Saliva”.